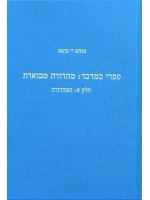 Price: $125.00
Format: Hard Cover
ISBN 10: 965493552x
ISBN 13: 9789654935524
Catalog Number: 9789654935524
Number of Pages: 1144
Year Published: 2011
Description:
I concluded the Preface to my work, Prolegomena to a New Edition of the Sifre on Numbers, that was published in 1982, by writing: It is my hope that just as I was privileged to finish this Prolegomena, so, too, may I, aided by Heaven, be privileged to publish the edition itself. During the years that have passed since writing those lines, despite my concentrating on other topics, I continued to search for textual witnesses of the Sifre that were concealed in libraries throughout the world, in the East and the West, and I continued my efforts to interpret its expositions and decipher its hidden treasures. Now, after having completed the preparations for the entire edition and the commentary for the first half of the work, comprising the portions of Naso and Beha`alotekha, I decided the time has come to publish them.Sifre is a Tannaitic midrash on the book of Numbers, and is rightfully considered to be one of the fundamental assets of our ancient literature. Its previous edition was published about ninety years ago by R. Hayyim Shaul Horovitz. Since then, additional manuscripts have been discovered of Sifre, its first commentators, and medieval collections and midrashim that cite it. This was accompanied by the significant development of the methodological conceptions of the study of the Rabbinic literature, and of the ways to publish critical editions of this literature. All these factors justify the publication of a new scientific edition of this midrash.

The text of the new edition, that is based on MS. Vatican 32, includes many versions that differ from the earlier version, and that occasionally shed new light on the exegeses and halakhot of the Sifre. It is accompanied by the scholarly apparatus that lists and explains all of the edition`s changes from the version of MS. Vatican. The number of direct and indirect textual witnesses presented in the Textual Variants section of the new edition is twice, and at times even triple, the number of textual witnesses that were available to Horowitz. In the detailed commentary on the expositions in Sifre, I made considerable use of all the Sifre commentators who preceded me, and who made a decisive contribution to the literal explanation of the midrash`s exegeses and the clarification of their meaning. Thanks, however, to the diverse textual witnesses available to me and the great progress made in recent generations in the study of the language and teachings of the Tannaim, I believe that I have succeeded in recreating the original version of many expositions, in giving them a new and straightforward explanation, and in advancing the research of their redaction.

The edition is intended, first and foremost, for the scholars, in Israel and throughout the world, who are engaged in the research of all aspects of the Rabbinic literature. Additionally, the new edition will likely aid the community of Torah scholars who teach and study in yeshivot, and the educated public at large.