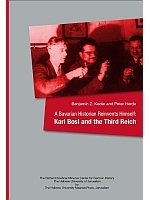 Description:
The prominent historian Karl Bosl, who during World War II had been a high school teacher in Ansbach, Franconia, intimated that he had been critical of the Nazis and asserted that he had belonged to a small group that engaged in active resistance; one of its members, Robert Limpert, was apprehended by the Nazis and brutally put to death just hours before the Americans arrived. The present study, based on a large number of unpublished official and private documents, records Bosl’s manifold links to the Nazi regime and reveals that as late as December 1944 he delivered a stirring lecture before Ansbach’s Nazi leadership in which he extolled the struggle for the preservation of Hitler’s Greater German Reich; yet as early as September 1945 he vigorously condemned Nazism at a ceremony at Limpert’s grave. The documents attest also to how Bosl succeeded in persuading Ansbach’s Denazification Tribunal that he had risked his life opposing the Nazis. An unpublished account allows for a detailed reconstruction of the daring, little-known activities of young Limpert and his three classmates.