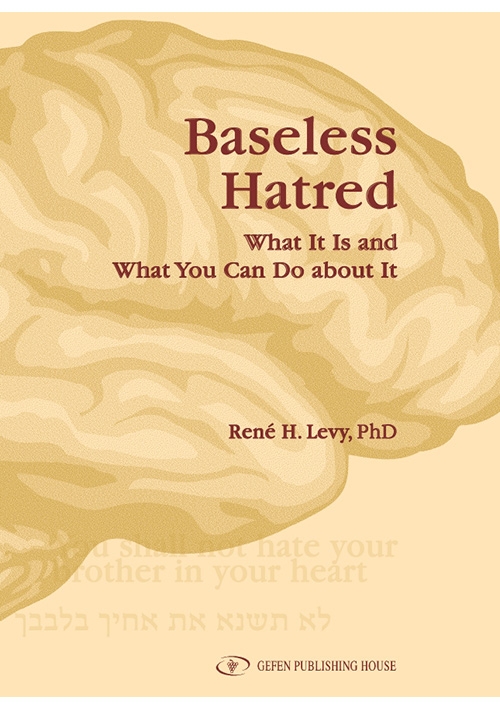 A Science-Based Understanding of Mechanisms of Hatred
Baseless Hatred

Also available on Amazon.
To order on Amazon click here.
What It Is and What You Can Do about It
Author: Rene H Levy
Publisher: Gefen Publishing House

Price: $26.95
Special Price: $24.10
Format: Hard Cover
ISBN 10: 9652295302
ISBN 13: 9789652295309
Catalog Number: 9789652295309
Number of Pages: 160
Year Published: 2011
Description:
What is hatred? What is baseless hatred? And how does this basic human emotion affect our relationships, our communities, and our world? In this fascinating study, pharmacological researcher Rene H. Levy looks through a scientific, sociological, and religious lens at the causes and effects of baseless hatred, and offers a prescription for preventing and repairing its damaging consequences. Levy examines the psychological and neurobiological bases of baseless hatred, and shows how it destroys interpersonal relationships. Baseless hatred is understood within Jewish tradition to have been the cause of the longest exile of the Jewish people from the Land of Israel; Levy discusses the impact of baseless hatred  both from without and from within  on the State of Israel, including an analysis of Islamist anti-Zionist hostility and the more recent Western antisemitic opposition as well as the new existential questions posed by the post-Zionist movement. Finally, Levy shows how the cement that has kept the Jewish people united as a nation, known as arevut, mutual responsibility, proves to be the remedy for the devastating problem of baseless hatred.

Visit this book's website at www.baselesshatred.com
Reviews:
Hatred was at the core of the Holocaust and all its methods of annihilation. Yet in the wake of the Holocaust, hatred did not become a significant animus for the Jewish people. Every generation must evaluate the meaning of the Holocaust within the continuum of Jewish history. Rene Levys book, which deals systematically with the phenomenon of hatred  and specifically with baseless hatred  presents a gripping challenge: what are the ways and means for dealing with the dynamics of disputes and divisiveness, particularly expressions of baseless hatred, within the Jewish people? This is an opening for a vital discussion for all of us.
Avner Shalev,
Chairman, Yad Vashem Directorate; Brigadier General, IDF

Rene Levys book Baseless Hatred attempts to pinpoint the fundamental source of evil and find ways to reduce it. Levy analyzes the Jewish people as a whole, focusing with surgical precision on the State of Israel. Delving deep into various sources, historiosophy, theology, and the Zionist endeavor, this work presents an analysis of hatred among the people of Israel, including that which led to 1,878 years of exile. This book will find its place in the libraries of readers at the highest level. With its direct relevance to current events, Baseless Hatred will serve as a springboard for vital public discussions.
Professor Shevah Weiss,
former Speaker of the Knesset; former Chairman, Yad Vashem Council

Hatred is a harsh sentiment that defies exact definition, and yet it is encountered by all of us at some point in our lives. Baseless hatred is identified by Jewish tradition as the cause for the destruction of the Second Temple, and thus as emblematic for the substantial personal and collective harm that has ensued. In its most extreme form, this kind of hate aims to exterminate ones fellow man. Even when it is not
totally eradicated, baseless hatred can be channeled and restrained. Levys book is an effective jumping-off point for discussion of this important subject.
Professor Dan Michman,
Head of the International Institute for Holocaust Research and Incumbent of the John Najmann Chair of Holocaust Studies, Yad Vashem;
Chair, Finkler Institute of Holocaust Research, Bar-Ilan University
You may also like: