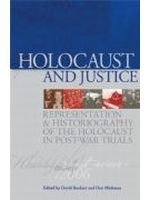 How Were Nazi War Criminals Treated by Germany?
Holocaust and Justice

Also available on Amazon.
To order on Amazon click here.
Representation and Historiography of the Holocaust in Post-War Trials
Authors: David Bankier
Dan Michman
Price: $51.00
Format: Hard Cover
ISBN 10: 9653083538
ISBN 13: 9789653083530
Catalog Number: 9789653083530
Number of Pages: 344
Year Published: 2010
Description:
The historical significance of the Nuremberg Trials is widely acknowledged, and it is equally agreed by most people today that the murder of European Jewry was the greatest crime committed by the Third Reich. So why wasnt the Holocaust a central issue in any of the thirteen trials conducted by the International Military Tribunal in Germany between 1945 and 1949? This book addresses this and related questions discussing the place of the Holocaust and its coverage by the media in the post war trials of Nazi criminals conducted in various European countries.
You may also like: