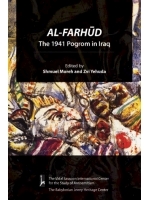 Price: $61.25
Special Price: $43.50
Format: Paperback
ISBN 10: 965-493-490-6
ISBN 13: 9789654934909
Catalog Number: 9789654934909
Number of Pages: 398
Description:
The present volume is being published on the sixty-ninth anniversary of the Farh�d, the pogrom committed by religious and nationalist Arabs against the Jews of Iraq on the Jewish holiday of Pentecost (Shavuot), 12 June 1941. The Hebrew edition of this book was published in 1992 by the Research Institute of Babylonian Jewry in Or Yehuda, Israel. This volume is a revised version of the Hebrew edition. The title consists of papers on the pogrom and on the events leading up to it which were originally published in English, others which were written in Hebrew and now appear in English for the first time, and documents which have not been previously published, including an updated list of the names of victims of the Farh�d and a map indicating the places in Baghdad where rioters attacked Jews. This book thus provides the English reader with comprehensive and updated information on the Farh�d and constitutes a memorial to the innocent victims killed during these pogroms and whose only crime was that they were Jews.
You may also like: