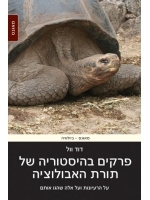 Chapters in the History of the Theory of Evolution

Also available on Amazon.
To order on Amazon click here.
The Ideas and the Savants who Suggested them
Author: David Wool
Publisher: The Hebrew University Magnes Press

Price: $39.00
Special Price: $37.50
Israel release Date:
Title not yet in print. Pre-orders ship worldwide from Israel by the Israel release date.
Format: Paperback
ISBN 10: 9654934957
ISBN 13: 9789654934954
Catalog Number: 9789654934954
Number of Pages: 458
Year Published: 2010
Description:
The theory of evolution evolved in the last 200 years. The book presents, for the first time in Hebrew, a survey of the ideas brought forward by scientists about the origin and the diversity of the living world, from the 18th to the end of the 20th century. Every chapter focuses on one of these scientists, to illustrate the uniqueness of his ideas against the views prevalent at the time. The contributions of Georges Cuvier and Jean Baptiste Lamarck in France, and of Charles Lyell, Charles Darwin, Alfred Russel Wallace and Thomas Henry Huxley in England, are emphasized, as well as the opposition to Darwin`s views expressed by Bishop Sam Wilberforce, the biologist George Mivart, and the engineer Fleeming Jenkin. The description of the first mutations in plants, and the re-discovery of a paper by Gregor Mendel in 1900 , began the era of genetics. The Dutch botanist Hugo de Vries suggested a theory of mutations which was enthusiastically endorsed by the geneticist Thomas Hunt Morgan, when many mendelianmutations were discovered in his laboratory cultures of Drosophila. Genetic methods were employed in field studies of Drosophila by Theodosius Dobzhansky and his associates, and cooperation with Ernst Mayr yielded the genetic definition of the term species. Following the geneticists, mathematicians developed the theory of population genetics in evolution - R.A.Fisher, J.B.S.Haldane and Sewall Wright. The combination of these models with Darwin`s natural selection yielded the Modern Synthesis of the theory of evolution. Dissenting views of Richard Goldschmidt caused re-thinking about some established evolutionary principles.The introduction of electrophoretic and later molecular methods into field research on evolution in the mid-20th centurycaused a change in emphasis, giving more weight to random processes than to natural selection in evolution at the molecular level (The neutrality hypothesis of Motoo Kimura). The theory of evolution will no doubt continue to evolve in the future. (Hebrew)
You may also like: