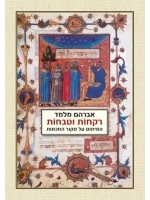 The Myth of the Jewish Origins of Science and Philosophy
Author: Abraham Melamed (Editor)
Publisher: The Hebrew University Magnes Press

Price: $39.00
Israel release Date:
Title not yet in print. Pre-orders ship worldwide from Israel by the Israel release date.
Format: Paperback
ISBN 10: 9654934221
ISBN 13: 9789654934220
Catalog Number: 9789654934220
Number of Pages: 522
Description:
The history of the myth of the Jewish sources of philosophy and science from it`s inception in Hellenistic culture, until present day, is laid out inthis book, the first comprehensive history of this fascinating subject. The Author follows the emergence and development of the myth, in Hellenistic-Pagan culture and in ancient Jewish culture, through the writings of the Church fathers, in Medieval Christian, Muslim and Jewish thought, throughout the Renaissance, the Early Modern period, the Enlightenment Era in both the general and Jewish cultures and up to present day. The book lays out the stories and traditions regarding the myth of the Jewish origins of philosophy and science, and explores their chain of transmission and acceptance throughout the generations in four different cultures: The Hellenistic-Pagan, Jewish, Christian and Muslim. The motives for the creation of these stories and traditions of this myth, as well as the reasons behind it, are all thoroughly discussed. Amongst them is the justification to study foreign wisdoms by Jewish scholars. Once it had been proven that the source of all philosophical and scientific knowledge lies in the Torah, their study became an inherent part of the study of the Torah, a re-appropriation of the knowledge that has been lost in the tribulations of time and exile. The myth also served Islam and Christianity as similar apologetic theological reasoning. Although various aspects of the myth have been criticized since the Renaissance, a phenomenon which reached its apex during the Jewish Enlightenment, it has never lost its power and is still expressed in a variety of ways in Jewish and Israeli Culture today. About the author:Abraham Melamed is professor of Jewish philosophy in the department for Jewish History and Thought at the University of Haifa, and holds the Wolfson Chair for the Study of the Jewish Cultural Heritage (Hebrew).
You may also like: