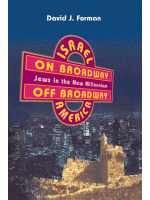 Israel On Broadway  America Off Broadway

Price: $19.95
ISBN 10: 9652291943
ISBN 13: 978-9652291943
Catalog Number: 9652291943
Number of Pages: 290
Description:
Daring, bold and controversial, Israel on Broadway offers tough advice as it examines the delicate, troublesome relationship between Israel and Diaspora Jews. Thought provoking and honest, this is an intelligent guide for building a stronger, healthier Judaism for the new millennium.
Reviews:
Anyone who cares about the continued vitality of Israel, the perpetuity of the Jewish people, and the very survival of Jewish life, must read it.
Alan Dershowitz, Professor, Harvard University)

Clear and compelling!
Ezer Weizman, President of Israel David Forman, a resident of Jerusalem, is a pillar of the Union of American Hebrew Congregations In this strongly and persuasively argued book, the author is greatly troubled that, at times such as the Gulf War, when Israel was under attack, Diaspora Jews, particularly those from America, distanced themselves from Israel. That anger is intensified by the author's belief that when Israel sends (as he writes) a rescue team to Entebbe, flies Ethiopian Jews out of war-torn Addis Ababa, or absorbs hundreds of thousands of Russian Jews, it does so for the sake of the Jewish people. In his discussion of the process of assimilation among the Jews of America, he argues that the most essential component for strengthening Jewish identity is the process of immigration. Without continual immigration, he writes, the relationship between Israel and the Diaspora will become static. There are, as he and I have both seen, reiterated calls in the United States for a return to tradition and study. But these, the author argues, simply will not work. They will not save the American Jewish community. It is, in his view, identification with Israel and immigration to Israel that will alone revitalize the Jewish identity and preserve the Jewish future of American Jewry.

The key to the author's perspective, which is certainly shared by many thinking Israelis, and by those few Diaspora Jews who have the courage to appreciate his arguments and recognize their force, is that only in Israel is normalcy possible for Jews. Any Diaspora Jew who has been in Israel during any of the Jewish holidays and Holy Days realizes just how alien from Jewishness a Jew can feel when he is in a Diaspora setting at such a time, quite apart from the alienation at such times from the majority non-Jewish world around him. This book is a powerful pleas for health: the health and survival of the Jewish people wherever they live.
Martin Gilbert, The Jerusalem Post, November 20, 1998
You may also like: