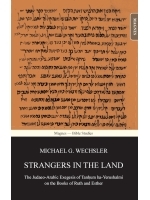 Strangers in the Land
The Judaeo-Arabic Exegesis of Tanhum ha-Yerushalmi on the Books of Ruth and Esther
Author: Michael G. Wechsler
Publisher: The Hebrew University Magnes Press

Description:
This volume consists of a critical edition, English translation, and extensive introductory discussion of the Judaeo-Arabic commentaries on Ruth and Esther from the exegetical digest (Kitab al-bayan) of Tanhum ben Joseph ha-Yerushalmi (d.1291 CE), the last known exegete of the rationalistic school who wrote in Judaeo-Arabic. Although past scholarship has tended to regard Tanhum s exegetical contribution as little more than that of a compiler-abridger, our own assessment, as explored in the introduction, is that his role was in fact much more significant. Not only does he display the critical acumen and intellectual independence of a true exegete in his own right, but he also appears to have assimilated and hence (like Abraham ibn Ezra) mediated into the continuum of Rabbanite exegesis certain elements of Karaite exegesis, most notably, as developed by the tenth-century Karaite litt.rateur Yefet ben Eli, the role of the mudawwin in the composition and transmission of the biblical text. Michael G. WECHSLER, Ph.D. (2006) in Near Eastern Judaica, University of Chicago, is associate professor of Hebrew and Biblical Studies at the Moody Bible Institute in Chicago. His research focuses on Semitic (especially Judaeo-Arabic) Bible translation and exegesis, and his publications include The Arabic Translation and Commentary of Yefet ben Eli the Karaite on the Book of Esther (Brill, 2008) and Evangelium Iohannis Aethiopicum (Corpus Scriptorum Christianorum Orientalium 617; Peeters, 2005). He is also co-editor of Brill s Karaite Texts and Studies series along with Meira Polliack (Tel Aviv University).