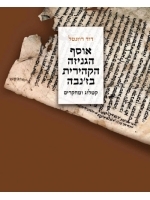 Description:
Some 350 large vellum sheets, originating from the Cairo Geniza, were uncovered this May by Professor David Rosenthal of the Hebrew University at the Bibliothèque publique et universitaire, in Ganeva.

The Cairo Geniza is an immense depository of Jewish texts, first discovered in the late nineteenth century by Professor Zalman Schechter in the synagogue of Fustat, Cairo. The Geneva collection had apparently been acquired in the same year by a Geneva university papyrologist, Professor Jules Nicole, supplementarily to papyri he had purchased.


Following a preliminary examination of the material, it was apparent that the Geniza collection in Geneva included many new fragments of great interest, pertaining to various fields of Jewish studies.

Bible: A copy of the Bible carries a dedicatory inscription on the front page of Genesis: Dedicated to the Synagogue of the Jerusalemites, cursed be he who steals this, cursed be he who sells this, cursed be he who knowingly buys this. The book was owned by the community of the synagogue of Fustat, which followed the tradition of Eretz Yisrael (i.e. Jerusalem). Indeed, there were also a number of fragments belonging to an assemblage of haftarot. Thesereflect the practice of a three-and-a-half-year torah reading cycle in the tradition of Eretz Yisrael.

A Masoratic text that was in this collection concludes with a message referring to the renowned masora authorities Ben Naphtali (9th-10th centuries) and adds a name to the geneological roster of this celebrated family. He provides the traditional vocalization and cantillation symbols, but deals with counting the verses as well.

Talmud: The Geneva collection includes fragments of Mishna, Talmud Bavli and Midrash, as well as two fragments of the Talmud Yerushalmi. The latter, preserved in only one medieval manuscript )the Leiden Ms.), is therefore of particular interest: the fragment of Yerushalmi Bikkurim amends the traditional text, while the other is an abridged version of Yerushalmi Kiddushin.

Halakha: A number of fragments of Geonic texts were found, including a copy of Halakhot Gedolot, Rav Saadya Gaons Sefer Mizevotin Arabicand fragments of halakhot of Alfasi and Maimonides. Of special interest are two pages of previously unknown responsa of the geonim Rav Sherira and Rav Hai, addressed to the community of Egypt (10th century).

Also found was a fragment of Sefer haGalui, a polemical treatise by Rav Saadya Gaon against the Exilarch and against the head of the Babylonian academy. This text, previously preserved in Hebrew and in Arabic, was found in Geneva on two joined folios. It includes a new passage of the Hebrew version and a previously published (1891) passage of the Arabic version, but here the copiers had excised Rav Saadyas pungent attacks against his adversaries.

Liturgy and Prayer: Liturgical verses of HaQalir, previously known in corrupted versions, appear here. Completely new material was also discovered, such as an important liturgical poem from a rare book of piyyutim by Rav Sa`adya Gaon. A laudatory poem by Dunash ben Labrat (10th century) to Hisdai ibn Shaprut, as well as new liturgical poems have now become available to us.

Historical Documents: Found in the new collection are a bill of divorce written in Fustat in 1166, and four letters of correspondence written by and to the leaders of the community. These include a response ruling on financial matters, written in Arabic by R. Elhanan ben R. Hushiel (Qayrawan, first half of 11th century), of whom only two letters were previously known. This find helps clarify a scholarly debate regarding the identification of this scholar with Rabenu Hananel Berabi Hushiel, the great commentator of the Talmud.