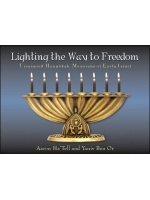 Description:
The Hanukkah Menorah (Hanukkiah in Hebrew) has also been at the ceremonial center of recent events in American life that hold profound historic importance. Hanukkah and the lighting of menorahs have become respected facets of American culture, gracing increasingly more American public areas during the winter holidays. 'Happy Hanukkah' has become a common greeting that acknowledges Jewish identity. The giving and lighting of special menorahs has also served as gestures of friendship between the US and Israel. In 1950, President Harry S. Truman, who led the world in endorsing the creation of a Jewish state, accepted a hanukkiah from then Israeli Prime Minister David Ben-Gurion. Presidents Jimmy Carter, Ronald Reagan, William Clinton, and George H.W. Bush all publicly participated in menorah lighting ceremonies. The hundreds of menorahs illustrated in this book are artistic gems that span the four decades surrounding the 1948 birth of Israel, from the late 1920s through the early 1970s. They represent the Golden Age of Hanukkiyot (Menorahs) produced by the craftsmen of a bygone age. The images found on these works of art go beyond the story of the Maccabees and Hanukkah. They reflect the world as seen through the eyes of Jews who experienced, first hand, the rigors of war and the pangs of birth in the land of their people.