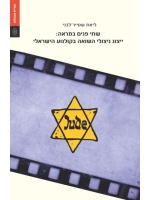 Two Faces in the Mirror

Price: $30.00
Format: Paperback
ISBN 10: 9654934183
ISBN 13: 9789654934183
Catalog Number: 9789654934183
Number of Pages: 260
Year Published: 2009
Description:
Why did the Israeli cinema disregard the Holocaust for many years? Why did it represent the Holocaust survivors as a homogeneous group of passive, detached and problematic people and ignored their enormous contribution to the prosperity of Israel? Was there any change in these representations from the late 40`s until the present time?

These questions are the center of the book Two Faces in the Mirror, that depicts the representation of the Holocaust, the Holocaust survivors and their rehabilitation in Israeli fiction and documentary cinema during 1945-2009. It is well known that films do not reflect reality, however they reflect cultural and social atmosphere  influence it and are influenced by it. The analysis of Israeli fiction and documentary cinema reveal two different paths of memory, two faces in the mirror: A society that ranges between shallowness and in-depth views, between strengthening superficial stereotypes and shattering them, between implanting distorted narratives and multi-cultural openness towards the other.
You may also like: