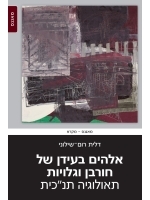 Description:
The book GOD IN TIMES OF DESTRUCTION AND EXILES: Tanakh (Hebrew Bible) Theology
presents the discourse about God in one of the most severe eras for the people of Judah. The
author poses the question: ‘What was said about God?’ by prophets, kings, historiographers, poet,
and the ‘people’ during the first half of the sixth century BCE, in reaction to the dramatic events
which lead to the destruction of Jerusalem and the Babylonian exiles. Using the methodological
tools of Tanakh (Hebrew Bible) Theology Dr. Rom-Shiloni reconstructs a multifaceted religious
world of thought presented both overtly and covertly by variety of voices engaged in great
controversies and polemics. The book draws a full range of perceptions, from justifying God in His
deeds, to skepticism, protest, and even to denial of His involvement in the historical events. Like in
later periods of crisis in Jewish History, the discourse about God focuses on three major issues:
God’s role in the destruction and exiles, divine justice, and the present and future relationship
between God and His people in face of the national catastrophe. The book calls attention to the
Judeans’ world of thought, in which all the participant voices were seeking ways to console reality
of suffering with their traditional beliefs about God as Lord of Justice, good and benevolent, as
well as the Omnipotent and Omniscient Lord of history.