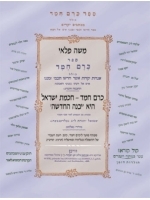 It includes a comprehensive monograph on the journal and its writers, the subject matters discussed in it and its editorial orientation as part of the Study of Judaism movement. The journal represents the creative efforts of the Hebrew scholars of Hochmat Israel, the Study of Judaism, in the 19th century.

The book is the third in the monographs and indexing project of Hebrew Haskalah periodicals published by Magnes Press. Previously, it published The Gate to Haskalah: An Annotated Index to Hameasef, the First Hebrew Journal of the Haskalah (17831811), 2000; and Bikurei Haitim The First Fruits of Haskalah: An Annotated Index to Bikurei Haitim, the Hebrew Journal of the Haskalah in Galicia (18201831), 2005.

The monograph delineates the background of the publication of Kerem Hemed, its editors and its major writers, such as Shlomo Yehudah Rapoport (SHIR), Shmuel David Luzzatto (SHaDaL), and Nahman Krochmal (RaNaK), and its relations to periodicals published before and afterward.
It discusses the variety of topics in Jewish Studies published in the journal, such as Bible, biblical criticism and commentary, Talmud, its sages, and studies about them, and the Mishnah. There were also studies on the Hebrew language, Jewish history, and newly discovered medieval Hebrew manuscripts, such as biblical commentary by noted biblical scholars as Abraham Ibn Ezra, Talmudic interpretation and historical review of Judaism as presented by the scholars of Hochmat Israel, as well as some secular subjects and science.
You may also like: