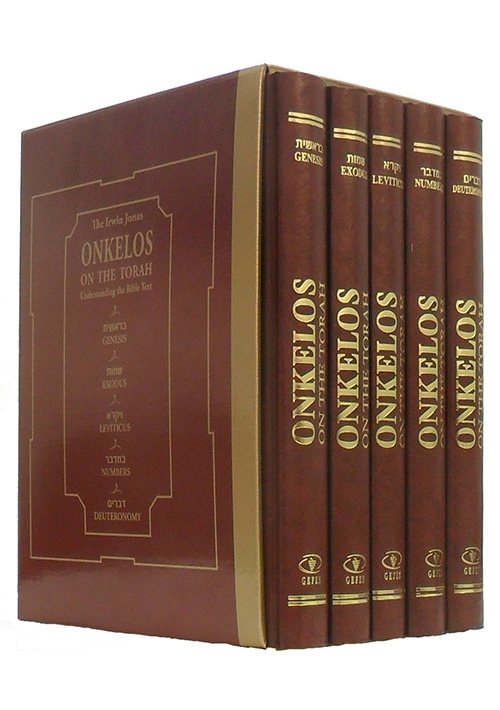 The books of Genesis, Exodus and Leviticus are the first three of this five - volume set to be published. This deluxe edition, which contains the Hebrew Massoretic text, a vocalized text of Onkelos and Rashi, Haphtarot in Hebrew with an English translation from the Aramaic Targumim, a scholarly appendix, and a Beyond the Text exploration of biblical themes.

Israel Drazin is the author of seven books, five of which are on Targum Onkelos. He was the first scholar to recognize that the Targum took hundreds of items from the Tannaitic Midrashim-those that were edited around 400 C.E.-and even incorporated many words found in these Midrashim in his translation. He was able, therefore, to date the Targum Onkelos around 400 C.E., a period much later than is widely accepted, because of the Targums reliance upon these Midrashim. Dr. Drazin received a number of rabbinic ordinations, and earned a B.A. in theology, an M.Ed. in Psychology, an M.A. in Hebrew literature, a J.D. in law and a Ph.D. in Aramaic literature. He resides in Boca Raton and Jerusalem with his wife, Dina.


Learn why the sages mandated the weekly reading of Onkelos and why Rashi cites him so often.
Jewishcolorado.org
March 2006
See a full discussion about this title on Dan Rabinowitz's Seforim weblog.

Gefen publisher Ilan Greenfield said, 'We were definitely thinking of the Christian market from the beginning, a market that is very much a Bible-studying market. We see that in the Christian pilgrims who come to Israel.' Two Christian stores near Buffalo, N.Y., Kairos and Bender's, surprised Greenfield by making orders of 12 and 30 books respectivelytwo or three times the number he would expect from a Jewish bookstore for the same title.

At last, the English speaking world will be able to understand why our Sages mandated the weekly reading of Onkelos and why it is imperative for us today to understand Torah through the eyes of the most accepted and popular translator of the Bible in Jewish history.
-Rabbi Yona Metzger, Chief Rabbi of Israel

It is a pleasure to recommend with enthusiasm this new volume a historic translation which is more exegesis than ordinary translation. Rabbis Drazin and Wagner have added an important volume for all those who want to take Torah seriously.
-Rabbi Dr. Norman Lamm, President Yeshiva University

'The authors of 'Onkelos on the Torah,' in an imaginatively conceived and beautifully crafted book have shown us not only how to read Onkelos but have enriched our understanding on how the Bible itself is to be read.'
- Michael Rosenak
The Hebrew University, emeritus
You may also like: