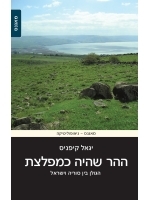 The Mountain That Was As a Monster: The Golan Between Syria and Israel (Hebrew)
Hahar Shehaya Lamifletzet
Author: Yigal Kipnis
Publisher: The Hebrew University Magnes Press

Description:
HA'HAR SHEHAYA KEMIFLETZET is the Hebrew title. It's the story of the Golan and its position between Israel and Syria is not only a legacy of the past. It has been interwoven in the political experience of the two states up to now. The story exposes a significant gap between memory and history. This gap is natural, understandable, and characteristic of issues dealing with current history and especially of those whose subjects and the resulting findings touch upon present questions. Such a gap usually leads to a preliminary reaction of difficulty in accepting research findings. Personal or public memory confronting these findings has already been structured and there is a natural fear of updating it. Additionally, in some cases, research conflicts with existing myths, and myths, which have their own validity, cannot easily be changed. While the story of history is formulated and updated and is ultimately dependant upon research which has been conducted using methods and accepted rules for historical research, memory is personal and private, choosy, subject to illusion and dependent on its agents. Thus, the gap between the two is personal. Regarding the Golan, the reader may evaluate its extent. The gap between memory and history is important as it directly influences the political process in Israel where public opinion sways the decisions of leaders. Therefore to reach a peace agreement, it is a precondition that the Israeli public appreciate this gap. Only in this way will public opinion be able to accompany the process and evaluate it in a serious manner, with careful consideration based on the facts, as detached as possible from the emotions it evokes.