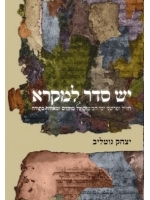 Order In the Bible (Hebrew)

Also available on Amazon.
To order on Amazon click here.
The Arrangement of the Torah in Rabbinic and Medieval Jewish Commentary
Author: Isaac Gottlieb
Publisher: The Hebrew University Magnes Press

Price: $42.67
Special Price: $39.95
Format: Paperback
ISBN 10: 9654933934
ISBN 13: 9789654933933
Catalog Number: 9789654933933
Number of Pages: 480
Year Published: 2009
Description:
Order In the Bible: The Arrangement of the Torah in Rabbinic and Medieval Jewish Commentary examines ideas about biblical order in the commentaries of Rashi, Ibn Ezra, and Nahmanides against the background of the Midrashic tradition. On the face of it, the arrangement of portions in the Torah is chronological, but close examination reveals more than a few discrepancies. The Midrash sometimes responded by saying that There is no earlier and later in the Torah (en muqdam ume'uhar ba-Torah) the order of the Torah is not always chronological.
This response left the reader facing unexplained juxtapositions of chapters and verses. In some of the cases, the sages asked, lama nismekha, Why were these two portions juxtaposed? Usually, they sought to connect the unconnected stories and verses in the midrashic fashion, by adding to the events of the stories or by taking the second unit as the outcome of the first and deriving therefrom some moral teaching. Occasionally though, we find an attempt to answer the question of juxtaposition in terms that might be considered closer to the peshat method of explication.
Moving in the direction of the peshat, medieval Jewish exegetes tried to explain biblical arrangement of both narratives and law based on thematic, associative, or literary links. Their attempts resulted in new ideas about the ordering of the Torah.
This book contains hundreds of references to juxtaposition and non-chronological arrangements cited in the writings of the above commentators. These examples are put into the framework of each commentator's general approach to interpretation and his particular sense of biblical order.
You may also like: