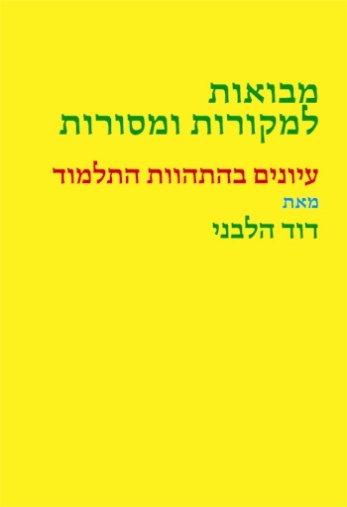 Price: $33.00
Special Price: $31.95
Format: Hard Cover
ISBN 10: 965493406x
ISBN 13: 9789654934060
Catalog Number: 9789654934060
Number of Pages: 248
Year Published: 2009
Description:
The standard study of Talmud is to accept the given as ultimate, that the sayings and the interpretations recorded therein are faithful to what was actually said. After having checked for the genuine version, for the right GIRSAH, eliminating the scribal errors, the text assumes reliability and serves as a starting point for further discussions and additional deductions.
For over forty years, Prof. David Halivni has questioned the given as the authoritative text and argued for the necessity to go back in time and reexamine the veracity of the interpretations. Many of the given interpretations are forced, do not neatly fit the text they interpret and often attribute to the authors of the statements intentions that they did not necessarily share. As a consequence, substitute interpretations were necessary to which the multi volumes of Sources and Traditions were dedicated.

While the books dealt mainly with the actual Talmudic interpretations, the introductions dealt with the causes responsible for the deviations from the original. It took the writings of a few volumes to become clear that the interpretations, unlike the apodictic statements were not officially transmitted by the Transmitters, the professional reciters and reached the later compilers which are referred to in the volumes as STAMMAIM, anonymous scholars, only through random survival which was not always complete. Sometimes it survived in a truncated form which the later compilers filled in, conjecturing what was missing.

The present volume contains all of the introductions which provide the reader not only with the final conclusion but also with the developmental stages which led to that conclusion further strengthening its plausibility.
You may also like: