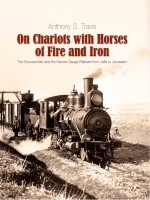 On Chariots with Horses of Fire and Iron

Price: $50.00
Special Price: $46.95
US release Date:
US orders placed before US release date ship from israel.
For US shipping, place your order after the US release date.
Format: Hard Cover
ISBN 10: 9659114702
ISBN 13: 978-9659114702
Catalog Number: 9789659114702
Number of Pages: 236
Year Published: 2009
Description:
This book deals with the arrival of modernity in the Holy Land in the form of the 86 km Jaffa-Jerusalem Railway. Befitting the completion of such a substantial undertaking, the inauguration, in September 1892, was a grand affair, attended by representatives of the Ottoman Empire, consuls, religious leaders, and foreign delegations. The tracks approached Jerusalem from the southwest through the Judean Mountains, taking advantage of the deep, winding river bed of the Soreq Valley. This afforded the least steep route, though even then the grades were a challenge for the locomotives. Since the tracks were of narrow meter-gauge they could easily follow the natural contours of the land on the ascent to Jerusalem, the highest point, at about 700 meters above sea level. .

The railroad was the largest civil engineering project ever undertaken in the modern Holy Land. It was built to exploit the tremendous growth of pilgrim traffic and tourism during the second half of the nineteenth century. Though several proposals had been put forward since the 1850s, it was only in the 1880s that two young Jewish entrepreneurs, Joseph Navon of Jerusalem and Joseph Amzalak of Jaffa, backed by the Protestant banker Johannes Frutiger, were enabled to take the first steps leading to the acquisition of a license from the Ottoman government for laying down the iron rails. Unable to raise sufficient capital in Europe, Navon sold the license to a group of Catholic businessmen in Paris, who established the Société du Chemin de Fer Ottoman de Jaffa à Jérusalem et Prolongements. When the first locomotive was tested on a short length of track at Jaffa half the population turned up to witness the event, such was the novelty of the sight and sounds of the horse of fire and iron. Despite difficulties due to the low cost of construction and poor traffic during the early years, the railroad opened up Jerusalem to modern tourism, brought greater numbers of pilgrims, and contributed to the growth of the city. It also delivered fresh water in times of drought.

This is the most thoroughly researched publication ever to appear on the first railroad in the Holy Land. Moreover, it relies extensively on the one resource that best captures the spirit of the Jaffa-Jerusalem Railway: magnificent photographs, mainly taken between 1891 and 1914. These early photographs, gathered from archives in Israel, the United States, England and Germany, are supplemented with those taken by British forces from December 1917 on, from Israel, Australia and England, and a number of color images dating from the mid-1980s.

Details of locomotives and rolling stock, maps, tables of statistics, track plans, extensive notes, a bibliography, and index are included. The intended audiences, apart from general readers and railway enthusiasts, are historical geographers, historians of the Holy Land in modern times, and transport and tourism historians.
You may also like: