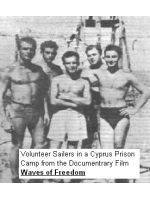 
Screenings of Waves of Freedom


Do you want to save your people?... If the British catch you, theyll hang you. Sounds like something from an espionage novel, only, the stories are true. Through poignant, insightful, colorful and sometimes humorous interviews, interspersed with historic footage, WAVES OF FREEDOM documents the amazing stories of American men, Jewish and not Jewish, who volunteered at their own peril to work on barely sea-worthy vessels to run the British blockade and smuggle survivors of the Holocaust into Israel. Included in this film is footage shot on board their ship, newsreels of the time and remembrances by one couple who met on the ship, married, and are now living in Israel. Additionally, there are interviews with several former members, including a rear admiral of the Palestine Patrol -the Royal Navy unit charged with Britains preventing illegal immigration into Israel - telling their side of the events. These are true stories upon which the Hollywood blockbuster film EXODUS was based.

The film recounts how 27 Americansmost of them Jewish ferried 1,500 Holocaust refugees from several European ports to Palestine in 1947 aboard a refitted U.S. coast-guard cutter called the Trade Winds.
The Jerusalem ReportSeptember 29, 2008

Archive footage is integrated with recent interviews with some of the volunteers who manned the ships. Two of the volunteers, Murray Greenfield and Harold Katz, will lead the discussion after the film. This is an outstanding film for all the family to learn more about the founding of the State of Israel.

'In the two years before Israel became a state, some 250 American and Canadian volunteers manned 10 barely seaworthy ships and ran the British blockade to bring 30,000 refugees to Palestine. The film, directed by Alan Rosenthal, uses dramatic amateur footage taken at the time and interviews with the volunteer seamen as well as with British marines who boarded the ships.'
Hadassah Magazine, January, 2009