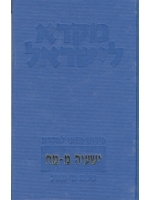 Price: $56.30
Format: Hard Cover
ISBN 10: 9651319194
ISBN 13: 978-9651319198
Catalog Number: 9651319198
Number of Pages: 619
Year Published: 2008
Description:
Mikrah Leyisrael Yisha'aya.. The anonymous prophet called Second Isaiah prophesied in the mid-sixth century BCE, toward the end of the Babylonian exile and the early return of the nation to Israel some 150 years after the prophecies of Isaiah ben Amoz (First Isaiah). Abraham ibn Ezra was the first to note that certain prophecies in chapters 40 66 should be attributed to a later prophet, and this insight was subsequently confirmed by modern scholarship on the basis of historical and linguistic criteria. Second Isaiah s earlier prophecies, delivered in Babylonia, are distinguished by a series of distinctive traits: emphatic affirmation of the uniqueness and incomparability of the God of Israel; universalism; sharp polemics against idols and their craftsmen; the announcement of the appearance of Cyrus, who executed the conquest of Babylonia and the liberation of the nation so they could return to Israel and rebuild Jerusalem and the Temple; the wanderings on their return through the desert; the eternal covenant, once promised to David, was now extended to all of Israel; and the four servant songs. Second Isaiah s latter prophecies, delivered in Jerusalem, describe the ideal future glory and centrality of Judaism while also referring to the practice of foreign cults and the schism within the nation between those faithful to the God of Israel and those who have forsaken Him. This two-volume Hebrew commentary of Second Isaiah (chapters 40 48 and 49 66, respectively), written by Professor Emeritus Shalom Paul, former Chair of the Bible Department of the Hebrew University of Jerusalem, examines the above-mentioned topics through a close reading of the text, offering an in-depth exegesis of the historical, linguistic, literary, ideological, and theological aspects of the prophet s writings. The intertextual influences drawn from earlier Biblical and extra-Biblical literature, primarily Akkadian and Ugaritic, shed light on many of the themes, verses, and words in the prophecies and render this work fascinating and unique. Paul s verse-by-verse commentary and synthesis make ample use of modern critical scholarship and also draws on the rich legacy of the medieval Jewish commentators. This comprehensive work is invaluable for students, scholars, and lay readers interested in broadening their understanding of Second Isaiah s message during these momentous episodes in the nation s history.