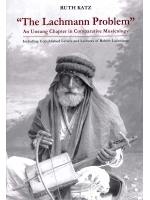 After being ousted by the Nazi regime, Lachmann arrived in Palestine in 1935 to join the staff of The Hebrew University of Jerusalem. However, many University officials misunderstood his interests, which was primarily based on a conception that the unfamiliar field of musicology was a luxury which the University could ill afford at the time. Presented in this volume are letters and documents, published for the first time, revealing not only a picture of life in Palestine during the 1930s, but providing new information on the early stages of comparative musicology and offer new insights into the thinking of its founding fathers. Others of these documents betray the daily routines, working style and methodology as well as the unanticipated hardships which Robert Lachmann encountered. These are embedded in letters to parents, correspondence with former colleagues, progress reports, lectures and radio lectures, and petitions to academic and bureaucratic authorities and several brilliant attempts to introduce non-European music to Europeans, and Orientals, Arabs and Jews alike, who were urged to cherish their musical heritage.

These documents were chosen primarily for their relevance to an unsung chapter in the history of musicology, which epitomizes Robert Lachmanns trying times.
You may also like: