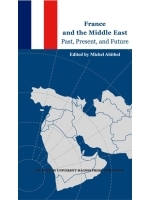 France and the Middle East

Price: $57.70
Format: Hard Cover
ISBN 10: 9654931931
Number of Pages: 338
Year Published: 2004
Description:
Rich and multiform, French influence in the Levant and Palestine was predominant until the end of the First World War. While conferring a particular importance upon its religious establishments, France has also always invested in the development of her economic, scientific, and technological relations with the countries in the region. Marking the beginning of her political disengagement from the Holy Land, the British Mandate period saw, notably, the gradual disappearance of the French language from the cultural life of Palestine. Frances return in force to the region would have to await the creation of the State of Israel and decolonization, first as a close friend of Israel, then, after the Six-Day War, as Europes most active political power in the Middle East.
You may also like: