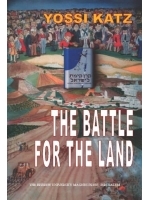 Description:
In 1901, the Zionist Organization founded the Jewish National Fund to purchase lands in the Land of Israel and transfer them to the ownership of the Jewish people. The book before us examines and summarizes the JNF’s land purchasing policies and endeavors, from the establishment of the Fund to the establishment of the State of Israel in 1948. A major part of this essay centers on the period from 1936 to 1948, which were the most important years of the JNF’s activities and during which it became almost the sole Jewish entity promoting this aspect of the building of the land of Israel. During these years, the JNF purchased about 600,000 dunams, which constitute more than 60 of its acquisitions from its establishment to the establishment of the State. The pivotal nature of the JNF during those years stems first and foremost from the recognition of its settlement endeavors by the top institutions of the Zionist Organization, in promoting the political interests of the Zionist movement in the land of Israel. The creation of actual real property owned by the Jewish people which also served as a foundation for settlement was a prerequisite for achieving a Jewish state. Under it’s articles of association, the lands purchased by the JNF cannot be sold. They were leased for the purpose of establishing agricultural and urban settlements and subsequently, the State of Israel applied this principle to all its lands (about 20.5 million dunams), of which JNF lands now constitute about 13.