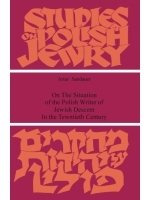 Studies on Polish Jewry, On The Situation of the Polish Writer of Jewish Descent In the Twentieth Century

Price: $14.70
Format: Paperback
ISBN 10: 9654932105
Number of Pages: 100
Year Published: 2005
Description:
A leading critic of Polish literature, Artur Sandauer (1913-1989) takes a hard, at times painful, look at the critical role that Jews and individuals of Jewish descent played as both creators and objects of literature and culture in twentieth-century Poland. Through an engaging series of essays, Sandauer analyzes major figures in Polish literature via the prism of one central, if at times muted, issue: the Jews. Sandauer begins his analysis by looking at such classics of Polish literature as Mickiewicz, continues by discussing the experiences of writers in the interwar era such as Tuwim and Schulz, challenges reigning myths of the war years with critical examinations of works by Andrzejewski and Miłosz, exposes the problematic relationship between writers and the Communist regime through the career of Ważyk, and concludes with hope for Polands future with discussions of Szymborska and, in a bold display of intellectual honesty, himself.

Written during the period of martial law, Sandauers work stands as a testimony to the power of the written word as well as the renaissance in Jewish studies taking place in contemporary Poland.
You may also like: