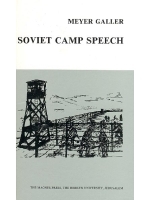 Description:
Soviet camp speech is as old as the camps themselves. Examples of it began to appear in the writings of former prisoners as early as the 1920s. Prison camp speech is a substandard variety of Russian, used by Russian speakers of every geographical origin and social background who have been unfortunate enough to have learnt it at firsthand. The idiom comprises legal and administrative jargon, borrowings from non-Russian Soviet languages, criminal argot, proverbs, abbreviations, obscenities and elements of uneducated peasant speech. It is a jargon which expresses the unique and grim experience of its users.