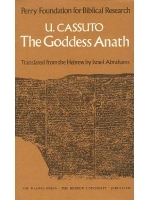 Description:
CASSUTO (1883-1951), one of the greatest Bible scholars and Jewish historians of his generation, was also a pioneer in the field of Ugaritic-scholarship. His book The Goddess Anath is a classic of its kind. It was first published in Hebrew by the Bilalik Institute in 1951, reprinted in 1953, 1958, and 1965, and appears now in the English translation of Prof. ABRAHAMS (reprint 2009).
The book contains three parts a) An introduction to Ugaritic literature that is based on the texts discovered (up to 1951) at the Ras-Shamra, in general, and on the epic of Baal in particular. b) Some Ugaritic tablets containing episodes from the epic of Baal, in which the Goddess Anath plays an important role. These texts appear in three parallel columns: the first gives a transcription of the Ugaritic text in Latin characters, the second contains Cassuto’s Hebrew translation, and the third comprises the English rendering. c) A commentary on these texts.
This work also sheds invaluable light on important and hitherto unexplained linguistic usages in the Bible, while the author’s brilliant methodology will serve as an enduring beacon of light to many generations of researchers.