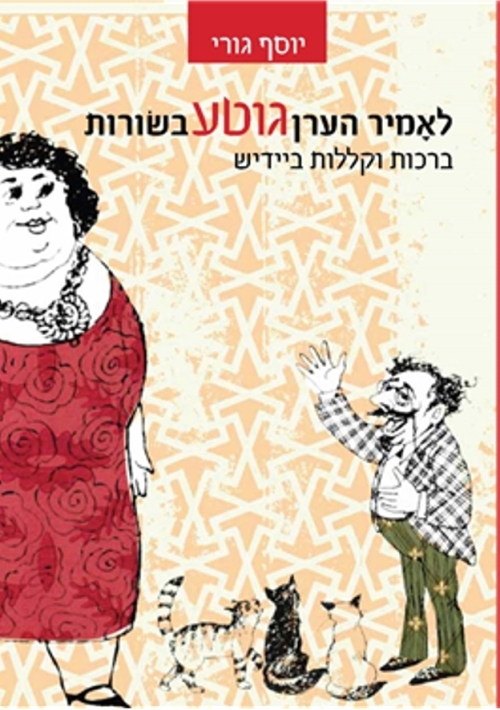 Price: $38.00
Special Price: $28.80
Format: Paperback
ISBN 10: 9659025025
Number of Pages: 280
Year Published: 2004
Description:
SHENISHMA BSOROT TOVOT. A first attempt is made here to portray this folklore genre in Yiddish lexicography. The 200 blessings and around 450 curses included in this dictionary are arranged alphabetically. The Yiddish entries are accompanied by their equivalent in Hebrew, Russian and English. Also added are literal translations (in Hebrew and English), for readers whose knowledge of the Yiddish language is at a minimum, but who would still like to know the actual ideas and images behind the Yiddish expressions. The dictionary is illustrated by amusing drawings. Also included is an introductory essay in Yiddish, Hebrew, English and Russian on the blessings and curses a subject almost never researched until now. This genre of Yiddish folklore is evidence of the fertile imagination of the Yiddish speaker and their keen sense of humor, and will be eagerly welcomed by specialists and Yiddish lovers around the world. May you grow like an onion with your head in the ground! Or, as it goes in the original Yiddish: Zolst vaksn vi a tzibele mitn kop in drerd! Thats just one of the colorful curses to be found in the new book, Lets Hear Only Good News: Yiddish Blessings and Curses, by Dr. Josef Guri of the Hebrew University of Jerusalem. Among the blessings is the familiar, Foon dein moil in gotz oieren From your mouth to Gods ears, an expression said in reply to a good wish. All told, there are 200 blessings and 450 curses in this folkloric work, which is illustrated with amusing drawings. The items are listed alphabetically in Yiddish, with the equivalent expressions in English, Hebrew and Russian. Indexes are provided in the translated languages according to alphabetical listing and by themes. This is the seventh lexicographical work by Dr. Guri, of the universitys Department of Russian and Slavic Studies. His other works include Yiddish idiomatic expressions and proverbs. Dr. Guri says that his latest work is the culmination of three years of work and is the first attempt to assemble and describe blessings and curses (or good and bad wishes) as a genre of Yiddish folklore. This genre is highly developed in Yiddish and is richer and more variegated than similar expressions in the folklore of many other peoples, says Dr. Guri. He acknowledges, however, that his book is by no means an exhaustive list of such blessings and curses since Yiddish has been spoken in many parts of the world, with local variations, and new expressions are still being coined. Among many peoples, curses are characterized by the use of foul language (swear words). Among the Yiddish-speaking Jewish Eastern European population, however, curses took the form of often humorous maledictions. Yiddish speakers, continue Guri, are accustomed to witty remarks and do not become overwrought when someone hurls an expressive curse at them. As the Yiddish proverb says, Fun a kloleh shtarbt men nit, or Curses do not kill. At the same time, neither does a blessing create a new reality, adds Guri. Josef Guri a self-described Yiddish addict immigrated to Israel from Lithuania in 1957. After eight years of work compiling the Great Yiddish Dictionary, he began work on a series of dictionaries compiling various forms of expression in Yiddish, including proverbs and idioms. Dr. Guri points out that his latest book is intended not only for Yiddish lovers but also for those learning the language, for translators from Yiddish and for those interested in folklore.
You may also like: