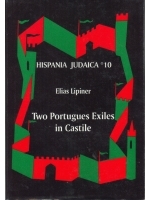 Price: $44.20
Format: Hard Cover
ISBN 10: 965223964X
Catalog Number: 965223964X
Number of Pages: 180
Year Published: 2007
Description:
The tenth volume of the Hispania Judaica series is dedicated to Dom David Negro and Dom Issac Abravanel, two important Jews from Portugal, whose lives present certain similarities: Both were involved in Portuguese political plots and intrigues involving the King and the nobility and were both forced to escape as political fugitives to Castille where they attained high positions at the court of Juan I and Isabel I respectively.
The book is partly based on sources from Portuguese archives, particularly the Arquivo da Torre do Tombo which houses one of the richest collections of medieval documents in Europe. Some of these sources are published in this book for the first time.
You may also like: