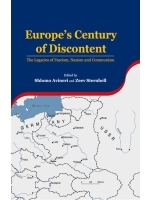 Price: $45.90
US release Date:
US orders placed before US release date ship from israel.
For US shipping, place your order after the US release date.
Format: Hard Cover
ISBN 10: 9654931753
Number of Pages: 304
Year Published: 2003
Description:
With the demise of the Soviet Union and the collapse of Communism in Eastern Europe, a number of questions regarding the conventional understanding of totalitarianism could now be viewed in the new light. The classical studies of totalitarianism were undertaken when Nazism and Fascism had been vanquished, while the Soviet system still existed: this created an asymmetry which could now be overcome. The ideological Cold War edge which sometimes accompanied debates about totalitarianism was similarly blunted.

The impetus which these developments could give to new angles of research and historical perspective was the focus of the conference Reflections on Europes Century of Discontent, held at the Institute for European Studies at the Hebrew University of Jerusalem. More than a dozen participants from eight countries  political scientists, historians, lawyers as well as political activists  took part in what was an exciting exercise in re-evaluation and re-assessments. The results are presented in this volume.
You may also like: