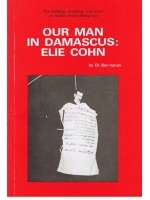 Description:
Elie Cohn was hanged from a hook in Martyrs Square, Damascus. The execution was carried live, from beginning to end, by the Syrian television network, while, in Israel, a pale woman watched every scene...

She was Nadia Cohn, the wife of Israels greatest spy - a man who had penetrated the highest echelons of the Syrian government so successfully that its President, El-Hafez, considered him an intimate friend.

Now the hard-hitting story of Elie Cohns amazing feats can be told. Though it reads like a Le Carre or Fleming novel, it is as tragic and true and shocking as todays headlines from the explosive Middle East...