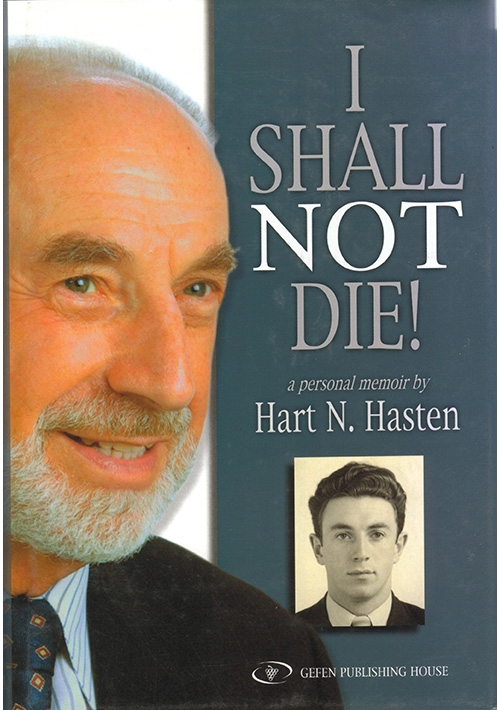 I Shall Not Die!

Price: $24.95
Special Price: $20.00
Format: Hard Cover
ISBN 10: 9652293024
ISBN 13: 9789652293022
Catalog Number: g302n / 302-4
Number of Pages: 376
Year Published: 2002
Description:
He came penniless to the United States after surviving the Holocaust Hart Hasten rose to the top levels of finance and industry. He became an integral part of his community at large, not only giving of his wealth but also his time and knowledge. He supported the Indiana University, United Jewish Communities, and many more, and founded The Hasten Hebrew Academy of Indianapolis. He has been living in Indianapolis, Indiana since 1964, and visits Israel several times per year. Two of his three children, and their families, live in Israel.

The book I Shall Not Die! is the personal memoir of Holocaust survivor, Hart N. Hasten. Looking back from the perspective of age seventy, the author presents an amazing account of escape and rescue from Nazi occupied Poland and his formative years in the DP camps of Europe. The saga continues as Hasten arrives in America and achieves extraordinary success in business and attains a position of international leadership in Jewish affairs. The books central core is an intimate account of Hastens twenty-five year friendship with revered Israeli political leader and Prime Minister, Menachem Begin. Hasten serves up a fascinating series of personal portraits, anecdotes and insights culled from his close relationships with Israeli and Jewish luminaries including Ariel Sharon, Elie Wiesel and Benjamin Netanyahu. Through it all, Hasten articulates the driving force and commitment to Jewish strength and independence that have defined him as a world recognized leader, as a serious and observant Jew and as a man.
You may also like: