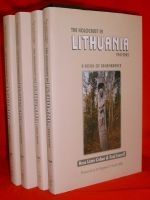 Description:
Following a pilot study, and after consulting with researchers, it became clear that there was no substantive record of the Lithuanian Jews who were murdered during the Holocaust. After five years of research, a comprehensive list of the names of many of the victims, together with an extensive collection of historical resources, has been published in this four-volume set. Additional information in this important publication includes deportation lists; the Yarzheit (memorial dates) of Jewish communities; and the ghetto census lists of Siauliai, the third largest city in Lithuania, as well as a comprehensive and useful reference list of relevant books, articles and films.

Edited and compiled by Saul Issroff