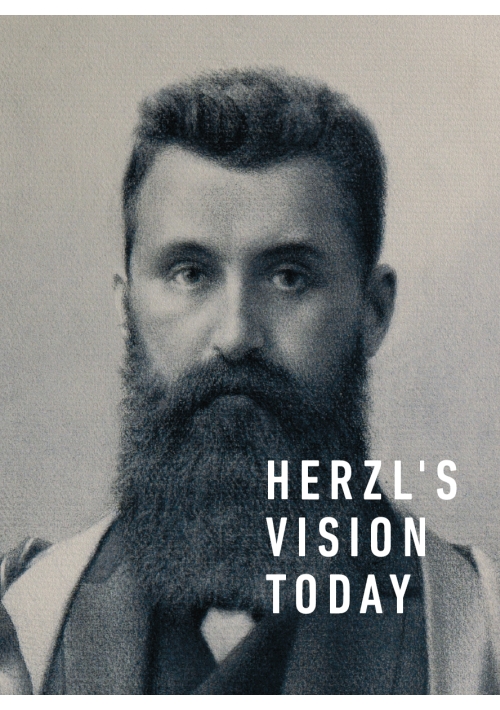 The subjects are varied and explore Herzl as a futurist, the architecture of Tel Aviv, wine, innovation, cinema, Israeli-Palestinian relations and an Interview with Herzl.

In addition, there are more than thirty bold, witty and thought provoking images by established and contemporary Israeli artists, illustrators, designers, photographers and sculptors, curated by
Shosh Nomberg Averbukh 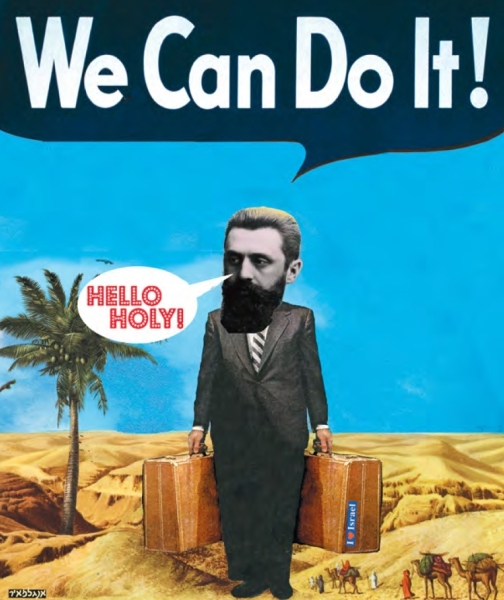 photo credit: Zev Engelmayer
We Can Do It! 2015, collage on paper

About the Authors and Their Essays.


Yosef Israel Abramowitz
The Art of Being Herzl, The Futurist.
Abramowitz was nominated by 12 Africa countries for the Nobel Peace Prize for his impact on solar energy.
Dr. David Breakstone
Herzl's Vision, Our Challenge An Interview with the Visionary of the Jewish State.
Breakstone was the conceptual architect and founding director of the World Zionist Organizations Herzl Museum and Educational Center.
Dr. Shmulik Duvdevani
The Missing Image
Duvdevani teaches at the Film and Television Department at Tel-Aviv University and at the Sam Spiegel Film School in Jerusalem.
Gol Kalev
Herzl and the Secrets Held in Israeli Wines
Kalev is the author of Judaism 3.0 and is the founder of the Jerusalem Wine Salon.
Yossi Klein Halevi
Herzl and Arab Israelies: What would he say to Reschid Bey today?
Halevi is a senior fellow at the Shalom Hartman Institute in Jerusalem.He is the author of a number of books, including Letters to My Palestinian Neighbor.
Nicole Levin
Herzl's Utopian Ideas that Inspired the Urban Planning of Tel Aviv
Levin is a practicing lawyer specializing in the preservation of historical buildings.
Chemi Peres
Theodor Herzl - If you will it, it is No Dream
Theodor Herzls Innovation Journey from an Old Era to a New Land. Peres is Chairman of the Peres Center for Peace and Innovation.