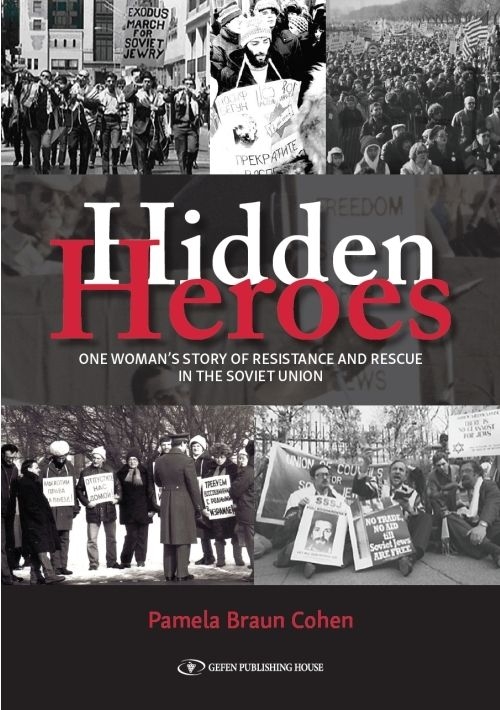 Also available on Amazon.
To order on Amazon click here.
One Woman's Story of Resistance and Rescue in The Soviet Union
Author: Pamela Braun Cohen
Price: $21.95
Special Price: $20.00
Format: Paperback
ISBN 10: B09H893N26
ISBN 13: 9789657801154
Catalog Number: 7801-15
Number of Pages: 424
Year Published: 2022
Description:
Spanning nearly three decades, Hidden Heroes gives an insiders view of the modern-day exodus of Soviet Jews from the Soviet Union, a period of Jewish history that has rarely been told and is in danger of being forgotten. This deeply personal narrative explores the grassroots Soviet Jewish emigration movement through the eyes of one of its indefatigable leaders, focusing on the actions of heroic refuseniks in the Soviet Union as well as courageous individuals in the West  described by Natan Sharansky as the army of students and housewives who waged the battle to free Soviet Jews.

From Russia, Ukraine, and Lithuania to the distant republics of Central Asia, refuseniks come to life, discovering their identity, protesting on the streets, defending themselves in courtrooms, defying jailers in their prison cells, and struggling to survive in Siberian labor camps. This engrossing memoir tells the story of the resistance and moral courage of men and women inside the Soviet Union and of those in the West who relentlessly crusaded on their behalf.

A very important memoir. Pamela portrays many Jewish leadersfrom different communities all over the United States, as well as Jewish refuseniks from different places all over the Soviet Union. It is this personal, intimate connection between these two groups that gave inspiration, encouragement, and strength to the people on both sides of the Iron Curtain and made our struggleso powerful.
Natan Sharansky
former Prisoner of Zion

Tells an important part of the unique story of brave and courageous individuals who effected immense change for human rights worldwide. As president of the grassroots activist organization Union of Councils for Soviet Jews, Pamela was there from the outset. This inspiring read gives us hope that we can continue to make this world a better place.
Alan Dershowitz
Professor Emeritus, Harvard University; lawyer for refuseniks and dissidents

Pamela Cohen wrote a book. It is not only hers. It is OURS. We wrote the book together, the page in the history of Am Israel. And that is why Pams book is so important. It is not about the past  it is a textbook for a Jewish fighter. Learn it and join our ranks. Am Israel CHAI!
Yosef Mendelevich
former Prisoner of Zion

As the spokesman for the Student Struggle for Soviet Jewry, I knew of Pam Cohens and the UCSJs work on behalf of Soviet Jewry. Few people are as qualified to write about the Soviet Jewry movement as she is. This is one of those books that can with no exaggeration be called important. It is also riveting.
Dennis Prager
New York Times bestselling author of ten books, including The Rational Bible
An irreplaceable history of the movement. Natan Sharansky called Pamela Cohen the five-star general of the army of students and housewives, and this is her account of how students and housewives defeated the Soviet Union. One womans story here illuminates a vast historic movement that changed Jewish and Israeli history.

Details how [Pamela Cohen] inspired others, transformed herself, and most importantly changed the world  sometimes over the objections of men much more famous than herself. An essential historical memoir and a great read.
Jonathan D. Sarna
Professor of American Jewish History, Brandeis University