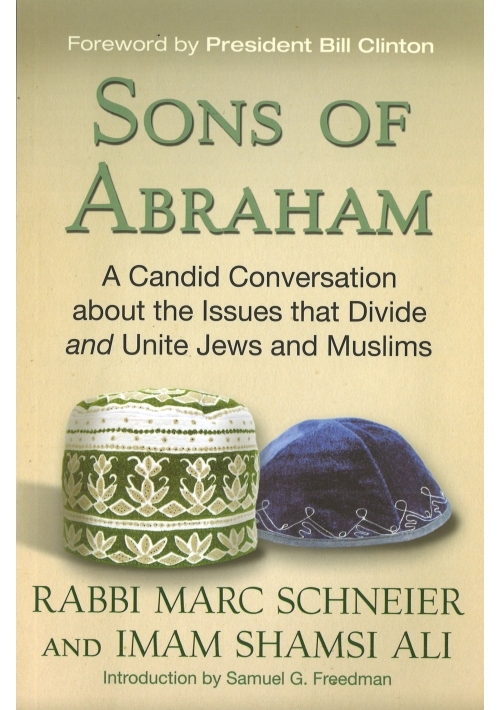 Also available on Amazon.
To order on Amazon click here.
A Candid Conversation about the Issues that Divide and Unite Jews and Muslims
Authors: Shamsi Ali
Marc Schneier
Price: $23.00
Format: Paperback
ISBN 10: 0807061190
ISBN 13: 9780807061190
Catalog Number: PR023
Number of Pages: 236
Year Published: 2013
Description:
A prominent rabbi and imam, each raised in orthodoxy, overcome the temptations of bigotry and work to bridge the chasm between Muslims and Jews

Rabbi Marc Schneier, the eighteenth generation of a distinguished rabbinical dynasty, grew up deeply suspicious of Muslims, believing them all to be anti-Semitic. Imam Shamsi Ali, who grew up in a small Indonesian village and studied in Pakistan and Saudi Arabia, believed that all Jews wanted to destroy Muslims. Coming from positions of mutual mistrust, it seems unthinkable that these orthodox religious leaders would ever see eye to eye. Yet in the aftermath of 9/11, amid increasing acrimony between Jews and Muslims, the two men overcame their prejudices and bonded over a shared belief in the importance of opening up a dialogue and finding mutual respect. In doing so, they became not only friends but also defenders of each others religion, denouncing the twin threats of anti-Semitism and Islamophobia and promoting interfaith cooperation.

In Sons of Abraham, Rabbi Schneier and Imam Ali tell the story of how they became friends and offer a candid look at the contentious theological and political issues that frequently divide Jews and Muslims, clarifying erroneous ideas that extremists in each religion use to justify harmful behavior. Rabbi Schneier dispels misconceptions about chosenness in Judaism, while Imam Ali explains the truth behind concepts like jihad and Sharia. And on the Israeli-Palestinian conflict, the two speak forthrightly on the importance of having a civil discussion and the urgency of reaching a peaceful solution.

As Rabbi Schneier and Imam Ali show, by reaching a fuller understanding of one anothers faith traditions, Jews and Muslims can realize that they are actually more united than divided in their core beliefs. Both traditions promote kindness, service, and responsibility for the less fortunateand both religions call on their members to extend compassion to those outside the faith. In this sorely needed book, Rabbi Schneier and Imam Ali challenge Jews and Muslims to step out of their comfort zones, find common ground in their shared Abrahamic traditions, and stand together and fight for a better world for all.
You may also like: