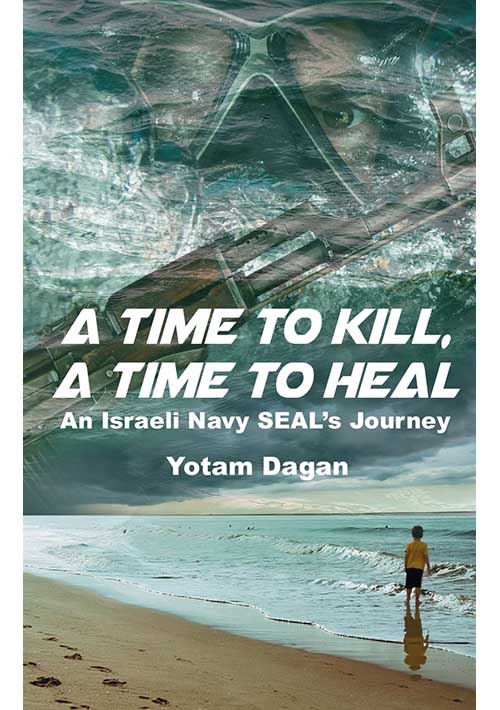 A Time to Kill, A Time to Heal

Also available on Amazon.
To order on Amazon click here.
An Israeli Navy SEALs Journey
Author: Yotam Dagan
Price: $18.00
Format: Hard Cover
ISBN 10: 9657023475
ISBN 13: 9789657023471
Catalog Number: g7347 7023-47
Number of Pages: 187
Year Published: 2020
Description:
Looking ahead into the dark, my compass, depth gauge and diving watch confirmed that we were headed towards our target in enemy waters. The mission was clear: to eliminate ships at anchor, ships that were planned to carry out an attack against civilians in northern Israel.

Onboard them were Zodiac rubber boats, AK-47 Kalashnikov assault rifles, RPG anti-tank rockets and plenty of ammunition. The Palestinian terrorists who had been trained for their deadly mission were set to execute their attack two nights later. This was a race against time. After a stealth approach into the harbor, I identified my target and attached the explosives.

For a moment, my memories took me back in time. I was hiding in a bush, an 11-year-old boy, during a terrorist attack, escaping sure death. Activating the time-controlled detonators, I felt the closure of another circle of destiny. An attack against my home, was thwarted.

Yotam Dagan, an Israeli navy SEAL, shares his personal journey from being a soldier and fighting wars to healing the invisible wounds of psychological trauma and PTSD.

This book is an important account of how human courage and determination, followed by suffering and vulnerability could leverage growth on an individual, community and national level.