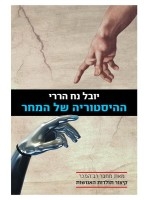 Description:
Homo Deus: A Brief History of Tomorrow like its predecessor, Sapiens: A Brief History of Humankind, recounts the course of history while describing events and the individual human experience, along with ethical issues in relation to his historical survey. However, Homo Deus deals more with the abilities acquired by humans (Homo sapiens) throughout their existence, and their evolution as the dominant species in the world.

The book describes mankind's current abilities and achievements and attempts to paint an image of the future. Many philosophical issues are discussed, such as the human experience, individualism, human emotion, and consciousness.