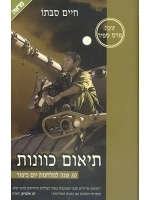 Description:
When war breaks out in 1973, childhood friends Haim and Dov are called up together to serve in their tank battalion, but in the chaos of battle the friends are separated. A month later, Haim returns alone, on his first leave home. As he struggles to come to terms with his experiences, weary and saddened but sustained by his religious faith, there is one question that remains uppermost in Haim's mind: What happened to Dov during those fateful days after the outbreak of war?

Reminiscent of S.Y. Agnon, Sabato's compelling, poignant account tells the story of a young man who has to adjust not only the sights of his tank, but his understanding of the world he lives in.