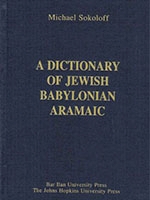 A Dictionary of Jewish Babylonian Aramaic of the Talmudic and Geonic Periods
Author: Michael Sokoloff
Price: $180.00
Special Price: $148.00
ISBN 10: 9652262609
Year Published: 2002
Description:
Jewish Babylonian Aramaic was the language spoken and written by Jews in parts of what are now Iraq and Iran from the third to the tenth centuries C.E., corresponding to the Talmudic and Geonic Periods. During this period, the major post-biblical Jewish literary work, the Babylonian Talmud, which has been a major force in Jewish culture and life since that time, was produced. The Geonim, the successors to the Rabbis of the Talmudic Period, wrote many legal works in Aramaic, since this language continued to serve as both a spoken and literary language for several centuries following the Muslim conquest.

All the existing dictionaries which include the vocabulary of Jewish Babylonian Aramaic are outdated since they were composed on the basis of the late printed editions of the Babylonian Talmud in which the Aramaic texts have been corrupted. Additionally, none of the previous dictionaries have included the special vocabulary of the Geonic Period, that of the writings of Anan, and that of the magic bowls.

As the basis of the present dictionary, the author has utilized the entire corpus of Jewish Babylonian Aramaic according to manuscript sources. In addition to the dictionary itself with its approximately 8,000 entries, the volume includes an index of all passages quoted, with their entry, in order to make the dictionary more usable.
This work is indispensable for all scholars working in the fields of Aramaic and Semitic linguistics as well as Rabbinic literature, especially the Babylonian Talmud.
You may also like: