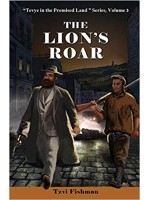 Also available on Amazon.
To order on Amazon click here.
Volume 3 of the Tevye in the Promised Land Series
Author: Tzvi Fishman
Price: $28.00
Special Price: $22.00
Format: Paperback
ISBN 10: 1726116107
ISBN 13: 9781726116107
Year Published: 2018
Description:
THE LIONS ROAR The adventures of Tevye the Milkman continue in The Lions Roar, the third dramatic novel in the Tevye in the Promised Land Series. While Tevyes granddaughter, Hannie, is finishing her college degree in New York, the love of her life, Avraham Yair Stern is purchasing weapons in Poland and training Jewish soldiers for a war against British forces in Palestine. When Perchik is murdered and three Revisionists falsely accused of the crime, brotherly strife in the Holy Land threatens the future of the entire Zionist endeavor. Perchiks wife, and his son, Ben Zion, hide the identity of the true murderers, and the ugly, blood libel leads to the false conviction of Avraham Stavsky. Rabbi Kooks campaign on behalf of the condemned man culminates in his triumphant acquittal. In a gallant bid of rapprochement with Ben Gurion, the efforts of Zeev Jabotinsky prove futile. In a more joyous development, Hannies tumultuous, on and off romance with the volatile Yair finally leads to the chuppah. But another Arab uprising leaves Jews slaughtered throughout the country. When Tevyes attempt to assassinate the Grand Mufti fails, he is forced to flee to America, where he raises funds for the Irgun underground with the assistance of the notorious Jewish mobsters, Meyer Lansky and Bugsy Siegel. In Jerusalem, under the command of David Raziel, Tevyes son, Tzvi, carries out devastating, reprisal attacks against the Arabs. When the British hang the Betar youth, Shlomo Ben Yosef, Jabotinskys leadership is challenged by Avraham Stern and the young Menachem Begin. Returning to the Holy Land, Tevye captains a boatful of illegal maapilim immigrants to the shores of Palestine, where the British are waiting to foil the secret, nighttime landing. The eccentric British commander, Orde Charles Wingate, a Bible-toting Christian, joins with the Haganah to squash the three-year-old Arab Revolt by unapologetically wiping out marauder encampments and entire Arab villages. When the British severely curtail Jewish immigration to Palestine and outlaw the further sale of land to Jews, the Irgun retaliates with a series of deadly attacks against British targets. During a mission to blow up the Rex Cinema in Jerusalem, Tevyes daughter is captured and brutally tortured. Willing to die for the cause of freedom, the young girl attempts a daring escape from the Bethlehem Prison for Women, in a symbolic act of defiance that rallies the awakening Nation to rise up in revolt against the British usurpers of the Jewish Homeland.
You may also like: