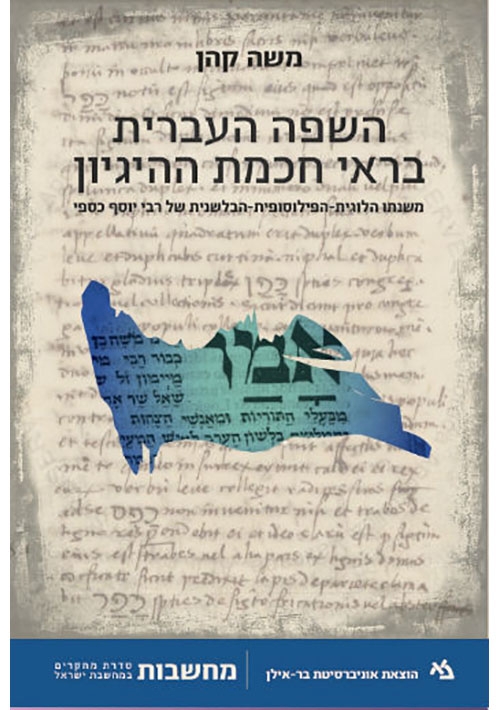 Hebrew in Light of Logic (Hebrew)
Hasafa Haivrit bare-ee chochmat Hahigayon Rabbi Joseph ibn Kaspis Philosophical, Logical and Linguistic Approach
Author: Moshe Kahan
Price: $48.00
Special Price: $38.40
Format: Hard Cover
ISBN 13: 9789652264985
Catalog Number: 8-226-498
Number of Pages: 212
Year Published: 2018
Description:
The study of Hebrew as a science in its own right began in the 10th century and reached maturity in the eleventh century with the writings of Jonah ibn Janah. The systematic and prolific preoccupation with logic theory flourished in Provence in southern France in the thirteenth and fourteenth centuries.

The first to attempt to combine these two areas  linguistics and logic  that developed side by side was Joseph ibn Kaspi (1280-1345). Kaspi, a member of the radical Maimonidean school of thought in Provence, who was deeply influenced by the teachings of Maimonides, wrote Sharshot Kesef, a Hebrew-Hebrew dictionary based on logical assumptions and considered to be the first of its kind in Hebrew linguistics. It was influenced by Aristotelian philosophy, Greek-Latin grammar, and scholasticism in the Middle Ages, thus breaking a new path in lexicography. His book Retukot Kesef is an introduction of theoretical principles into Hebrew grammar, comprising 73 chapters which are rules for the details applied in the dictionary.
This book offers an exhaustive study of this intriguing synthesis between the rules of Hebrew grammar, agreed upon and arranged in the early scriptures, and the logical and philosophical assumptions created mainly in Greek thought. This synthesis sometimes complements conventional linguistic thinking and sometimes challenges it. Many of Kaspi's principles are anchored in a broad logical concept that blurs the validity of individual grammatical rules. In this way, Kaspi was fundamentally different from all those who preceded him.
You may also like: