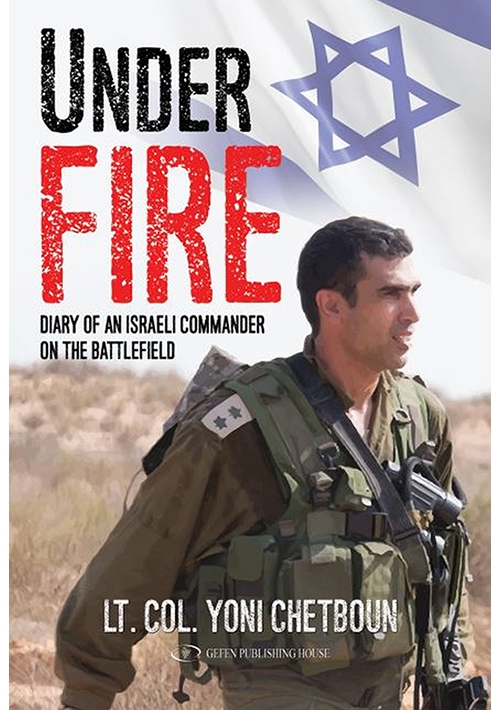 Price In Israel NIS 60
Under Fire

Price: $16.95
Special Price: $16.00
Format: Paperback
ISBN 10: 9652299162
ISBN 13: 9789652299161
Catalog Number: g916 / 916-1
Number of Pages: 184
Year Published: 2017
Description:
In this story of Israels struggle against Islamic terror from 1998 to 2008, now available in English for the first time, Lt. Col. (Res.) Yoni Chetboun describes his service as a commander during one of the most complex security periods in the states history.
The drama climaxed at the Battle of Bint Jbeil in the 2006 Lebanon War, in which eight soldiers and commanders fell. One was Maj. Roi Klein, who jumped on a grenade to save his soldiers. For his bravery in this battle, Chetboun was awarded a Chief of Staff citation. He relates here the thoughts racing through the mind of a commander under fire who bears responsibility for the lives of his soldiers.
This is a story of personal sacrifice. Chetboun arrived at his own engagement party with camouflage paint still on his face; his new wife was alone while he was in the heart of Ramallah, four meters from PA Chairman Yassir Arafats office. Yet, avows Chetboun, this is the way it should be: soldiers on the front so that citizens can live peacefully at home. He also articulates a clear vision of the foundational security concepts necessary for defeating fundamentalist terrorism. Incisive and inspirational, this is a must-read for anyone concerned about the world today.