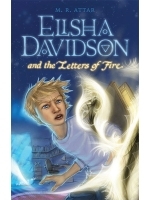 Description:
In the Old City of Jerusalem, a secret school exists which trains students in an all-powerful otherworldly wisdom. Young Elisha Davidson isn't considered one of their most promising students, but after he accidentally discovers a strange ‘stone’ buried behind the walls of his own home, he ends up unleashing mysterious letters of fire that plunge him into a labyrinth of ancient scripture, legend and mysticism. Now Elisha is not only light-years ahead of his classmates, he’s reached a more advanced level than his school’s most venerated ‘master'. What happens when Elisha suddenly holds the keys to unimaginable ancient powers?

Elisha Davidson and the Letters of Fire isn’t based on fantasy. It draws only on non-fiction manuscripts, dating as far back as 5,775 years ago, and exposes the most extraordinary and cryptic teachings of the human race.

An edutainment storytelling masterpiece! This exhilarating Harry Potter-style adventure delivers the fantastic world of Torah into the hearts and souls of young minds.
Rabbi David Aaron

Brilliantly done! This book could inspire a whole generation of kids (and adults)!
Rabbi Doron Kornbluth

Everyone wants their kids to read really GOOD and positive books. Well, this one does the trick, and at the same time, connects readers to mystical and spiritual secrets of the universe wrapped in an exciting and unforgettable story. This book will be a classic!
Tamar Yonah
Arutz Sheva, Israel National Radio Talk-Show Host.