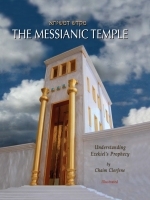 Also available on Amazon.
To order on Amazon click here.
Understanding Ezekiel's Prophecy
Author: Chaim Clorfene
Price: $36.00
Format: Hard Cover
ISBN 10: 0986002607
ISBN 13: 9780986002601
Catalog Number: 9780986002601 / d260
Number of Pages: 270
Year Published: 2013
Description:
More than 2414 years ago, the Prophet Ezekiel was shown a vision of a future Temple that would stand forever and bring healing and peace to the world. The key to building it depended on learning its design. But Ezekiels vision was cryptic and difficult to understand, and remained neglected and unexplained. Circa 1600, Tosefoth Yom Tov wrote that there were not ten men in his generation who understood Ezekiels design. A hundred years later, Rabbi Moshe Chaim Luzzatto, the great Italian Kabbalist, wrote Mishkanay Elyon (The Heavenly Temple), an inspired discourse about the Third Temple, explaining its design and inner mystical workings. Tragically, the manuscript was lost. Nearly 250 years later, in 1956, it was miraculously rediscovered in Oxford Uiversitys Bodelian Library. Since then, a new field of study has begun to emerge around the Third Temple. Now, a user-friendly work on the subject has been published. The Messianic Temple presents a lucid digest of classic commentaries, including glosses from Mishkanay Elyon, and more than 200 color diagrams and illustrations. For the first time, scholars and casual readers alike can prepare for the future by learning The Messianic Temple.