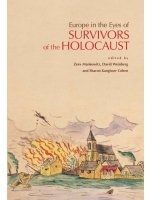 Description:
In what sense was the European heritage responsible for Jewish cultural and intellectual development? How could one describe the events of the Holocaust? Was there a future for Jews in a reconstructed Europe? A group of scholars suggests a more nuanced view by examining the perspectives of ten survivors  philosophers, activists, and memoirists  whose attitudes towards the European past were characterized by conflicting feelings of alienation and attraction.