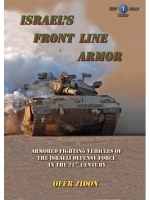 Description:
The first book in the IDF Armor Series covers the development of Israel Defense Force Armored Fighting Vehicles (AFV) during the first decade of the 21st century. In the book we feature Israel's land forces hardware including tanks, armored personnel carriers (APC), self propelled guns (SPG) and combat engineer vehicles.The chapters in the book are built chronologically, with each chapter covering a period of time or a conflict which took place between 2000-2011. A special chapter is dedicated to the development of the Merkava MBT. The book contain 80 full color pages with about 160 photos, most of them never published before.