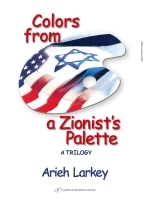 Description:
Arieh (Richard) Larkey was born in Newark, New Jersey, in 1935. At the age of eighteen, he volunteered to serve in the American Army and was sent to Occupied Germany as part of the NATO forces. It was there that his sense of Jewish identity intensified. Following the Six Day War in 1967, Arieh once again experienced a heightened awareness of his Jewish heritage, which eventually led to his aliya in 1971.

After a 30 year architectural career, Larkey closed his Jerusalem office and began to write. His books include: A Townhouse in Jerusalem (1996), Ruth Revisited: A Survivor's Journey (2001), Landscape of Conflict, Israel's Northern Frontier (2003) and Grandpa's Mountain: Letters from a border Kibbutz in Israel (2007).

The author divides his time between his home in the historical town of Zichron Yaacov, on the Mediterranean coast and the frontier town of Mitzpeh Ramon in the heart of the Negev Desert in Southern Israel.