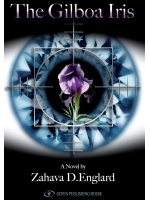 Description:
Dara Harow, the daughter of a rocket physicist for the US department of defense, sends her parents into a tailspin of dual-loyalty anxiety when she plans to wed Roni Ben-Ari, an Israeli officer in an elite counter-terrorist unit. When the Harows are targeted by a terror cell in hot pursuit of technology not yet found in any country’s arsenal, Dara finds herself at the center of a hierarchy of terror that threatens her life and the lives of those she loves. The Gilboa Iris is a blazing tale of romance, deceit and international intrigue. Its rich characters and explosive plot take readers from Israel’s Gilboa Mountains to the streets of New York, to Germany’s Zehlendorf Forest, and back
to Israel amid seminal events that rocked the world between 1983 and 2002.

Reviews:
Riveting – breathless action – a rousing story of romance!… The Gilboa Iris weaves together the timeless love story of Dara and Roni, a feisty American student and a brilliant Israeli commando, against the backdrop of global terror involving the infiltration of the US’s defense stratum and a double homicide on American soil. Zahava D. Englard merges wit, history, adventure and the triumph of the human spirit into a sensational read!
Grace Bennett
Inside Chappaqua Magazine

It was tough to tear my eyes away from The Gilboa Iris…. While the main character is not family(!) I did relate to her story and its incorporation of the very real tensions, terrorism fears and other issues that so many of us in the Western world must deal with today. A fast-paced, exciting read that has you praying for a happy ending.
Eve Harow
Israel National Radio Show host