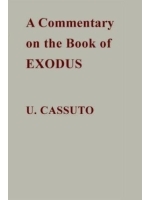 A Commentary on the Book of Exodus
Author: Umberto Cassuto
Publisher: The Hebrew University Magnes Press

Description:
The late Professor U. Cassuto had originally planned to write, in Hebrew, a monumental commentary on the Bible that would comprise a series of detailed expositions of the Book of Genesis, and less elaborate commentaries, consisting of one volume for each book, devoted to the remaining four books of the Pentateuch. It was also his intention to compose a compendious Introduction to the Torah as a whole, and a comprehensive commentary on the Book of Psalms. Unhappily the author died after completing only three of his commentaries (two on Genesis and one on Exodus).
The present volume, A commentary on the Book of Exodus, is the last of the commentaries to be rendered into English.
Cassutos comments have a vivid quality seldom found in the exegetical writings of other Biblical expositors, who all too often prefer a jejune and lifeless approach to their subject. Cassuto succeeds in injecting a sense of dramatic excitement into his interpretations. Without neglecting the scientific data provided by archeological and philological research, he makes us conscious of the literary attributes of the Bible.
Unlike the volumes dealing with the first two periscopes of Genesis, the present work does not separate the annotations from the Biblical text, but forms a continuous, unified commentary in which the Scriptural citations are interlinked with the exposition. The elements are so closely and artistically interwoven as to form a new literary entity – not a text with notes, but a homogeneous expository work, which must rank among the finest modern contributions to the treasury of Biblical learning.